Browser Game based on the One Piece saga - Experience the high seas and the real pirate's life: join Luffy and his crew on a thrilling adventure to be the one and only Pirate King!

One Piece 2 is an adventure browser-based MMO that allows you to assemble a crew of dangerous pirates and sail to dangerous expeditions with your character Luffy, with the ultimate goal to be the Pirate King.
Over the course of the story, you earn vitality points to make significant improvements to your crew to gain an upper hand in your fights.

In addition to living the story of the 'One Piece' treasure and the quest to become the Pirate King, you can also engage yourself in PvP battles against your friends and use your battle-hardened skills to finish top and win the spoils.

Ever wondered what the high tides of piracy in the anime world feel like? Ever felt the need to experience the colorful adventures of a pirate lord? If yes is the answer to both of these questions, you should probably try your hand with One Piece 2: Pirate King.
The game is a successor to One Piece Online and revolves around the life and missions of Luffy, a pirate lord and his crew.
The ultimate mission of Luffy is to become the Pirate ‘King’ and find the ‘One Piece’ treasure with the help of his crew. 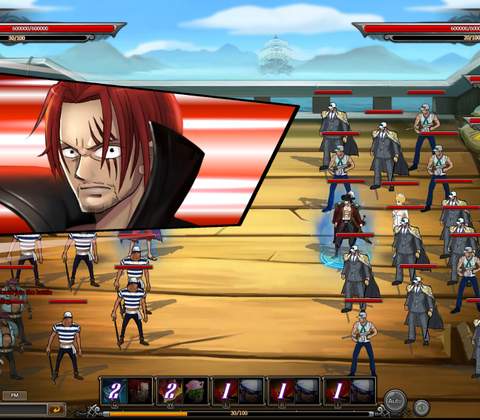 Like most other mmo games, One Piece 2: Pirate King begins with a character selection screen where the player can select a character out of four available classes; Sailor, Doctor, Dark Mage and Sniper.
The characters are gender locked but have their own qualities and specialties and each has a defined role to play in the Pirate crew. The Sailor is a short ranged unit while Sniper engages in combat from long range. Dark Mage is a magician while doctor, quite obviously, is a healer.

One Piece 2: Pirate King is all about engaging in battles with rival crews and that requires vitality points.

Each battle requires five vitality points and you are initially provided with a total of 200.

As you do well in battles, you gain stars which help you get better in-game rewards, and hence ensure better progress. Battles dictate what progress you make in the game but there are other activities as well which can prove fruitful if you want something extra.

One such PvE activity is Pirate Trail in which you come up against another boss pirate and test yourself to the very limit. Another such event is the Grand Line Warfare in which you need to control several Grand Lines by beating rival bosses to get mammoth stat bonuses.

In addition to the aforementioned PvE events, there are several PvP activities as well which include pirate battles and team battles. You can also battle against other players in what they call arenas to climb your way to the top of the leaderboard to find out who the ultimate king among your friends is.
However, to become the ultimate Pirate King, you have to have a good level of skill, which fortunately can be achieved in the game in a variety of ways.

For instance, you can improve your crew as explained above, or use the currency to enhance the stats of your character. You can also increase the effectiveness of your weapon’s attack by using gems.
Just like you get mounts in many other RPGs, your character gets access to ships when you advance a little into the game. These ships give to stat bonuses which you can use clearly to enhance your skills and inflict more damage to your opponents. 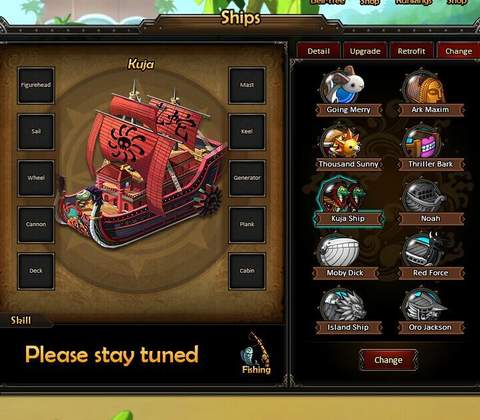 The Inventory in One Piece 2

As you continue to progress in the game and go through levels, you get the opportunity to hire other characters and increase the size and strength of your crew. Although the skills of the characters you hire cannot exceed the abilities of your Pirate Lord, they still go a long way in making a massive impact in battles and helping you to win against your opponents.

There are dozens of other characters which can be hired in the game each of which have unique abilities and skills.

These skills can be upgraded using the in-game currency and used when your crew has a certain amount of ‘Fury’ stored. Skills can only be used for so long and you have to regain your Fury once it runs out.

Initially, getting new crew members is not very straightforward in One Piece 2: Pirate King and you have to combine character fragments to induct them into your crew. In the game, you can employ as many members as you want, however, at any time, a maximum of 8 can be selected to fight. The formation and number of each type of character must be chosen by taking into consideration, the circumstances in which the battle is going to be fought.

The gameplay of One Piece 2: Pirate King is quite interesting and the game overall is fun to play. Moreover, the setting in the game is colorful and the graphics make playing it a light-hearted experience.

However, the game itself seems too similar to its predecessor One Piece Online and even the story does not completely satisfy the long-term fans of the series.

Ready to enter the world of One Piece 2 - Pirate King? Click here to play now!

Game is too similar to its predecessor.