2015 "monster hunt" MMORPG - Aeria Games takes us into a world of fantasy and the typical features of manga-style games; through grinding, grinding and more grinding, we will get the opportunity to recruit monsters and take them into battle with us!

Dragomon Hunter is a free-to-play downloadable MMORPG.
The title presents a typically oriental concept, with deliberately unrealistic characters and a vibrant and colourful game world.
The gameplay is typical of Korean MMORPG, made of fairly repetitive missions with plenty of farming and unrestrained grinding.
To diversify things a bit, there is a system of recruiting defeated enemies, through which we capture monsters and take them back to help us in combat.
Dragomon Hunter, far from representing an excellence in the genre, has proved to be an effective pastime. It's not without flaws, but still manages to entertain and amuse. It is recommended especially if you have a soft spot for the atmosphere and style of manga.

After the usual closed beta phase, used increasingly by various developers as a form of marketing, like a very limited trial period, Dragomon Hunter has finally been released in its full version, free to play on the web, making it accessible to anyone.
From a completely superficial point of view, the title might seem like the usual Korean MMORPG where repetitiveness and farming are the masters, but precisely in order to avert this eventuality, the developers have taken some development measures that promise to differentiate this game from the competition. Did they succeed in their aim? Let's find out!

As per tradition, the first task to be accomplished will be the creation of our character.
The game adopts a profoundly oriental manga style, which affects the style and parameters with which we can interact to modify our character. In addition to sex, we will be given the opportunity to customize the hairstyle, facial features (though it would be better to say "big eyes and small eyes"), skin color, voice and little else.
Far more important is the choice of class, chosen from four options.
The classes are mercenary, mage, cleric and scout, all quite traditional in their fantasy archetypes. Once we've made our choice, changing it will be impossible except by creating a new character from scratch.

Not without some regret, we can safely say that Dragomon Hunter offers little more than the usual slew of photocopy-quests to be completed one after another to advance and power up.
Let's face it, the Koreans are masters in creating titles based almost exclusively on grinding and farming and, in this case, these characteristics are more than evident from the earliest moments of the game.

Get ready to make all kinds of creatures your own

The world set up by the developers is evocative and full of monsters that are all different from each other (at least in appearance) and this partly mitigates the repetitiveness of the tasks assigned to us, even if, in the long run, boredom will inevitably arise.

Let's face it, the Koreans are masters in creating titles based almost exclusively on grinding and farming and, in this case, these characteristics are more than evident from the earliest moments of the game.

Dragomon Hunter's combat system is well anchored in the old MMORPG patterns to which we have become increasingly accustomed, being rather static and well away from the action.
The only bonus in the mobility department is a somersault that, by pressing the appropriate button, allows us to manoeuvre and quickly escape from enemy attacks. In truth, however, this is not really very practical and its perfect use depends more on chance than on quick reflexes to use it at the right time.
For the rest, we have access to the classic skills bar with which we can pour the effects of a particular skill onto our enemies.
The real novelty of Dragomon Hunter, which we mentioned above, is the ability to recruit the various creatures that we defeat, bringing them with us to help us fight.
Of course, this is not an entirely unprecedented in MMORPG, but, it must be said, it is well implemented here and perfectly consistent with the context, which goes perfectly with these recruitment mechanics.
The design of the creatures, somewhere between funny and serious, is a perfect middle ground that always makes the capture process interesting, on one hand managing to look like titles such as Pokémon on the one hand and on the other like games with decidedly less infantile tones.

The real novelty of Dragomon Hunter, which we mentioned above, is the ability to recruit the various creatures that we kill, bringing them with us to help us fight. 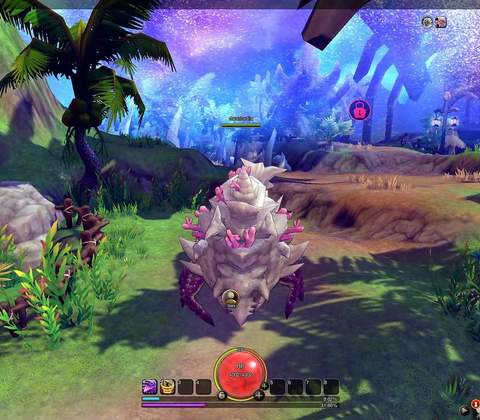 The artistic direction of the game is always rather inspired

From a visual standpoint, Dragomon Hunter stages a very respectful spectacle.
While it's far from the verging on excellence in the technical department, from a purely artistic angle the title manages to convince and to outline a world of poetry, magic and fairytale tones.
The least successful part of the whole package is probably the human characters we encounter during the game, but it's hard to complain about the environments and creatures.
Last but not least, the requirements to run it are very modest, even with older machines you will be able to enjoy the game without any particular drawbacks.

Dragomon Hunter is not a masterpiece, not a revolution, and its name will not go down in the annals of MMORPG history. However, while being based on mechanical repetitions after medium-long gaming sessions, it still manages to draw appreciation and to give a few hours of carefree fun.
The ability to recruit monsters, although not an absolute novelty in the genre, is a nice diversion, especially taking into account the excellence with which they are implemented.
The graphics aspect, then, is far more than simply the aesthetic representation of the game world, it allows you to dive into an imaginary fairytale where it's nice just to get lost admiring the scenery.

Ready to enter the world of Dragomon Hunter? Click here to play now!

Creature recruitment is a good idea

It's a stylistic delight

Way too much grinding

Technically not as good as the artistic direction

Creature recruitment is a good idea
It's a stylistic delight