Classic Role-playing Fantasy Game - Five different classes, tons of unique items, and a lot to fight for! Echo of Soul is another action-packed game full of combat and it is available for free.

Echo of Soul is a fantasy/ role-playing game which has been released by Aeria on Microsoft Windows. The game revolves around players' characters called 'Soulkeepers' whose main mission is to overcome evil and ensure peace. Players can collect the Souls of the enemies they overpower and then refine them to use for getting upgrades.

The map of the world in Echo of Soul, although relatively small, is pretty well-defined and features a number of battles raging all around it. The players can compete against each other and face Artificial Intelligence as well over a range of interesting game modes.

Aeria Games has brought forward the next big thing in the shape of a splendid, combat covered RPG, Echo of Soul. The game promises to be quite a catch, and with its unique classes of characters and a well-defined map, it seems to be quite a treat.

Just like in most MMORPG games, Echo of Soul requires you to design your own character. What’s exclusive to this game, however, is that there are five classes you can choose from. These include warrior, rogue, guardian, sorceress and archer. Each class can be utilized in two different ways depending on what the player wants to accomplish. The classes are gender-locked so there is only so much that you can meddle with while modifying the characters. At the start of the game, only a handful of dresses can be chosen in addition to a few accessories and some custom-made faces and facial features.

The game starts with a cut scene which allows the player to understand the story of the game from the beginning of times. There is a war between Gods and Giants which is ultimately won by the former. However, all does not end well and the contaminated blood of the Giant King spreads, threatening to cause significant damage. This is where the players come into the script and use their abilities to try to save the world from utter destruction.

Of Arenas and Dungeons

Echo of Soul is not a skill-based game and the player’s performance predominantly depends on the items and upgrades they come up with. As you progress through levels, you unlock skills and gain attribute points. In the beginning, the game is a PvE but once a specific level is reached, it can be played as a PvP. In PvP, there are guild vs. guild, the battlefield (15 vs. 15), the arena (5 vs. 5) and dungeons. In dungeons, players compete against each other to finish tasks, moving from one room to another as quick as possible. Echo of Soul is equipped with a ‘Smart matching’ system as well that allows the system to choose suitable opponents for the players based on their skill ratings.

The map in Echo of Soul is quite limited to say the least, and contains a number of sections. Each section is further divided into ‘rooms’ and the developers have done a good job in trying to make the transition from one room to another, rather seamless.

As far as the skills are concerned, each character has class-specified upgrades which get unlocked as the game progresses. The number of skills available to a player depends on how well they are doing in the world and as you move through the levels, you get to have even more options related to character modification.

In Echo of Soul, there are no skill based filters and therefore, it is quite possible that you, as a Level 10 player will encounter a Level 50 foe. The PvE competition level in the game is quite laughable to be frank and the only enjoyable thing which is challenging enough is the dungeons. During the latter, more advanced levels, it becomes problematic to even find a PvP rival for you as most people are hesitant to face a quite accomplished enemy.

The Hunger Factor and Soul System

One thing which is very unique about Echo of Soul is that the player actually has to eat between battles to land more effective blows. Each ‘meal’ adds a 2 percent boost to the player’s attack and HP which then expires after some time and consequently, the character has to eat again.

After killing an opponent, the player captures its soul which can be utilized for moving up through the levels. The souls belonging to monsters are initially corrupt and so, they have to be purified beforehand. Once the souls are fit to use, they can be consumed to enhance four major skills which are Hope, Innocence, Courage and Peace. Each Soul skill imparts distinctive powers to the character for a limited time and all four of them can be used one after the other.

Another interesting feature of Echo of Soul is that EXP is not very hard to come by. There are a good number of quests which are quite easy to accomplish and promise a decent amount of rewards and unlockables. In addition to the run of the mill quests, the level 10 PvP combat gets you ridiculous amounts of EXP for some reason.

All in all, Echo of Soul is a must try if you are a MMORPG fan just because of the uniqueness of its classes and the Soul factor, but admittedly, there are quite a few turn offs in the game too which can be conveniently ignored if you are looking to have some fun.

Ready to enter the world of Echo of Soul? Click here to play now! 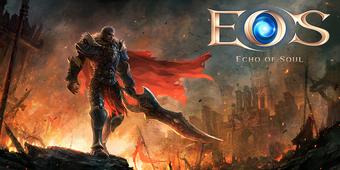 Originality
Select your character from five different classes. Each class has unique abilities and the power-ups are quite dynamic.