A "vintage" MMORPG with.. marriages - A number of classes, good upgrades and finances; Fiesta Online has all the ingredients for a fun RPG, despite its age.

Choose your character from a number of unique classes in Fiesta Online and develop their skills to complete a range of progressively difficult tasks and missions. Polish your passive skills to gain an edge all the time and get a momentary boost by unlocking various temporary active skills.

Manage your finances as well by selling items and completing missions to buy unlockables and upgrades which also enhance your character's performance. Engage with other players in a variety of ways, form allies and make enemies on your way to become the best!

Fiesta Online is a massively multiplayer online role-playing game developed by OnsOne Soft Ltd.
It was developed back in 2006 and was self-published by the company in Korea. Then, it got published overseas by One Spark. And later on, Gamigo picked it up and published it in Europe and then in North America.
Eventually in 2016, Gamigo acquired the worldwide development rights from OnsOne Soft Ltd and gained complete control of the game.

The game is a multiplayer role playing game where the player can choose his\her character from four available options, and have the option to select the gender of the character as well. The characters are inspired by anime styled artwork and this theme is depicted throughout the gameplay.

Each player controls one character during the game. The character’s skill level develops as the game progresses. There are three types of skills in the game. 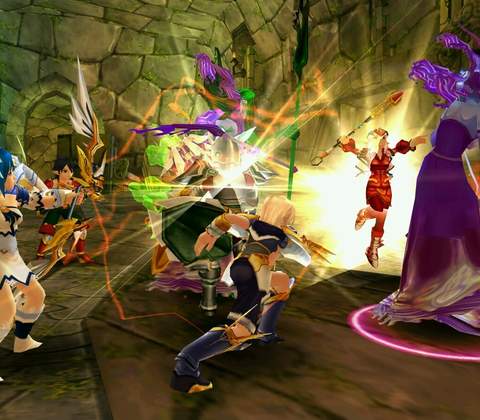 Fiesta is rich in action

Active skills are those skills which can be activated by the player at any time to give a temporary boost to the player’s performance and attributes. Each level of skill requires certain class and a definite number of spirit points.

Passive skills are skills which affect the player at all times during the game.

These skills are permanent in nature and improve certain attributes of the character such as attack damage and speed. Passive skills cannot be momentarily upgraded and remain the same during a period of time.

Alchemy skills are essentially the skills that can be used to make money. These skills can be used to create armor and/or weapons upgrade stones. They give a one-hour boost to the character that consumes them; for example healing potions that restore the character’s health for some time as well as increase resistance to poison and enemy attacks etc.
They can also be used to create higher tier materials from lower tier resources and thus adding value to the lower tier material.

Money can be earned by completing missions or by selling items.

If you are not feeling like going through a lot of hassle to earn money, you can just use real cash to pay for the game currency using Slime Coins feature.
The in-game money can be used to buy upgrades which can range from visual upgrades to gameplay enhancements.

Multiple players can get together and form a guild. A guild can then start a war with another guild.
This happens when one guild challenges another and the other guild accepts the challenge. Once a war starts, the number of locations the players can visit becomes limited. 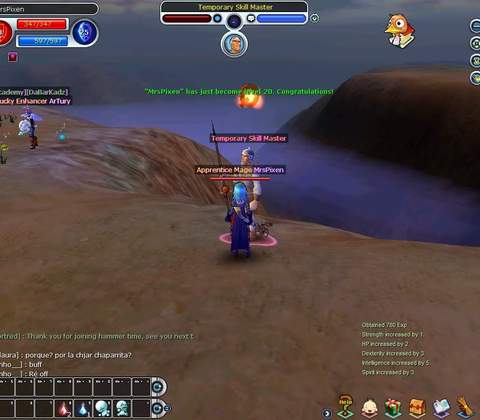 The well-designed characters of Fiesta.

Academies are there for players under Level 60 to join. Players can join them until they reach Level 60. Players above Level 10 in academies can do tasks which result in rewards in the shape of items and money.
The player has a choice to remain in the academy after the reach Level 60.

There is also a card system in the game. Cards can be collected by killing monsters. They can then be used to get bonuses and other exclusive items. Players can also trade cards among themselves.
You can also collect a number of cards and use them to get bigger and better rewards such as legendary pets and items.

One feature that had a lot of players excited was the in-game wedding feature. A player can propose to another player by getting a wedding application and buying a ring. If the proposal is accepted, they can then invite up to 30 guests to the wedding.
The players to be wed and the guests are then moved to a chapel where the wedding takes place. Gifts in the forms of pets and buffs are given to the newlywed couple after the ceremony.

Overall, this game satisfies what most users want out of games of this genre. The vast open world in Fiesta Online provides a nice structure to the game and a ton load of features, adventures and missions keep the players engaged and entertained.

Fiesta Online has a vast, healthy and growing user base which makes the game extremely fun to play. It has solid features, engrossing gameplay and functional graphics.

The graphics, although decent for a ten year old game, lag behind those of newer games.

Ready to enter the world of Fiesta? Click here to play now! 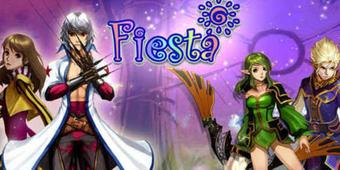