Dark Omen is a high fantasy browser-based MMORPG that pits you and other heroes against a demon invasion and you must save your world. The game is free to play and features in-depth MMORPG systems like PvE dungeons, PvP arenas, Guilds and more which is great for browser players.

The game offers limited class choices at launch, but makes up for it with very good graphics and combat mechanics. Content isn't original, but offers enough progression such as upgrading mounts, gear and more to keep players interested at the end-game. 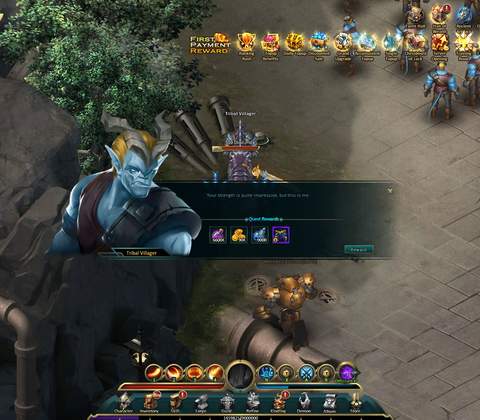 You may find yourself surprised at enjoying the PvE story if you were expecting it to be dull.

Dark Omen is a new, modern fantasy MMORPG that you can play on your web browser. After a somewhat prolonged loading duration, players get to pick between two classes. You select either the Blazing Knight or Inquisitor Knight, which plays rather similarly as both are melee classes with both DPS and Tanking abilities. They are also gender locked with no customization whatsoever. The limited choice for characters is disappointing initially, but more can be done for customization later in-the game. After loading in, your adventure to save your home world against hordes of demons truly begins.

The game is incredibly fast in terms of progression. No tutorials mean that you learn combat, systems and mechanics on the go. This is done through Autotracking and Autocombat. For the first 50 or so levels on your way to 90, the game is played for you - running from quests to quests, combat and other tasks are done for you, while you manually click on other progression systems like upgrades and equipping new gear. It's an odd but fun experience, as while you don't do much, you get to sit back and enjoy the story that unfolds. Players can manually take control around level 60. Getting to that point also takes less that an hour.

While it may feel like a passive experience, Dark Omen offers an all round MMORPG experience that you expect of games from the genre. You characters need to grow powerful and it does with experience points from killing large clusters of monsters. Progression also takes many different forms - you receive epic legendary weapons that you can upgrade along the way. This also includes cool looking wings with combat stats on them so it's not entirely fluff unlike other games. The one constant is the continuous upgrade possibilities that arise from just playing the game without the need to spend money in the game cash shop. This makes it fun but also fair for players.

Additionally, combat doesn't feel like a tack-on. It's a pretty robust ARPG style fighting system that lets you press abilities and spells with either your mouse of number hotkeys. Even better, the animations for your skills are great. You will also get to improve your skills along the way by spending points on them the higher your level. Elsewhere for weapons and gear, upgrade components are required for enhancing but these will drop in-game if you are grinding long enough. 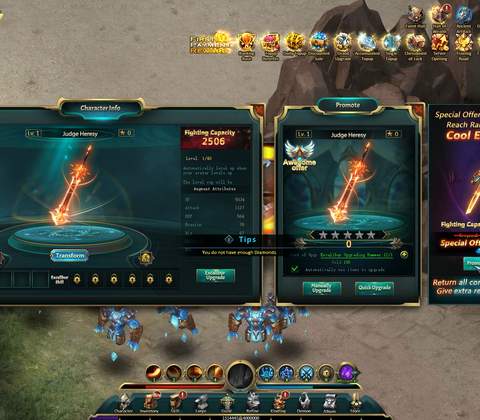 Players will often be presented with an opportunity to upgrade their weapons on the fly without needing to visit an NPC which is handy.

Where Dark Omen truly shines is with the gameplay modes available for players. For a browser game, Dark Omen remarkably offers a wholesome MMO experience. Landscape questing content is perhaps the most ordinary, as players mindlessly go kill and fetch objectives from point A to point B. But as you progress in levels, plenty of new game modes become unlocked. These includes PvP arena modes, Guild systems, Group and Team play and of course, dungeons.

Dungeons are incredibly fun and challenging as the difficulty procedurally increases. They are great for grinding important gear such as upgrade components, mount enhancements and of course, new weapons and gear. But the dungeon mechanics are what makes it fun. Either solo or with a group, players race against the timer to kill as many monsters the objective requires. Doing so puts you or your team on a leaderboard for glory in addition to getting that sweet loot. Dungeons are a fun and rewarding feature that makes you forget that you're playing a browser game sometimes.

Dungeons are a fun and rewarding feature that makes you forget that you're playing a browser game sometimes.

Plenty of Areas To Improve 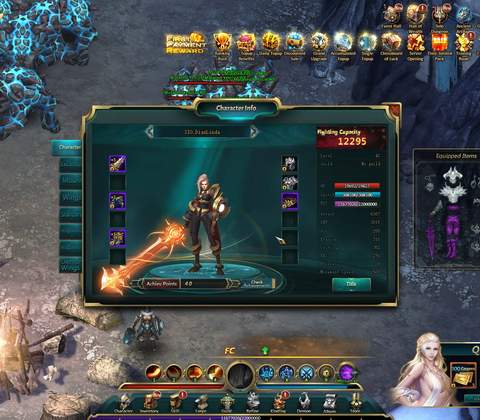 The game's UI can definitely use a face lift

While much of the game is worthy of praise, there are other departments that falls short. Most notable is that of optimization. Dark Omen is a gorgeous game in its own right - the character models and environments in 2D are bright, stunning and well put together. The bad part is that regardless of your internet connection or browser, the game takes forever to load. This occurs often to new players playing the game for the first time and as your character begins their journey, background images, textures and monsters are replaced with placeholders while the real images are loading. It's a jarring thing to see especially since it's a new player's first impression of an MMORPG.

The UI design (user interface) is another area that just serves to confuse instead of guide players. Dark Omen as stated above comes with plenty of MMORPG features, systems and progressions that as you may imagine, will need navigation to. The game's UI unfortunately is so cluttered with buttons at the top that it's completely normal to get confused while playing. Should these issues be addressed however, then expect Dark Omen to be one of the better browser MMORPGs out there. It's free to play, offers a fun narrative experience, and has damn good graphics. What more do you want?

Ready to enter the world of Dark Omen? Click here to play now! 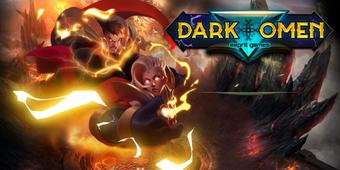 Originality
Dark Omen features high quality graphics and incredible amounts of MMORPG systems to keep players invested for hours and hours, which is a rare but good trait for browser games.

Great graphics for a browser game

Not required to buy anything from cash shop